World Music… No! Wait! Come back! Don’t run away! I know there are loads of people out there who hear the term “world music” and promptly turn away … and the thing is , 5 year or so ago I would have done exactly the same.

After all, you say, “World Music - isn’t that all African choirs from Paul Simon’s “Graceland” album, Pan-pipes, Aborigines blowing didgeridoos and Indians with Sitars?” Well, that’s the clichéd view and those instruments do undoubtedly crop up now and again but there is SO much more to it than that!

World music to me is a fantastic way to explore this planet of ours without setting foot outside your door. You want the romance of France, the sunshine of Greece, the laid back vibe of Jamaica, the carnival-yet-cool atmosphere of Brazil or the searing heat of the Sahara? Then listen to some world music and let the music take you there… for nothing, surely, is more evocative than music.

“Ah” you say “but they sing in funny foreign languages - I can’t understand what they are saying”. Exactly – and the thing is that is not in any way important. The fact that you don’t know the language doesn’t matter – you still get the emotion, the feeling and/or excitement of the music. You get the chance to explore the music as music, without being manipulated by mawkish or trite lyrics.

Over the last 5 years or so the “world music” side of my music collection has grown exponentially as I keep finding new musicians, new styles and new parts of the world to explore. In 2013 I had never heard of “Desert Blues”. Now bands such as Tinariwen and Songhoy Blues are amongst my most played albums. 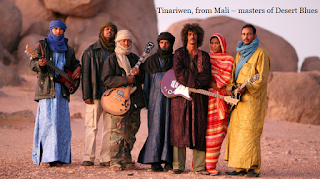 I fell in love with music played on the Kora (a kind of African harp) after seeing Sonah Jobarteh give a free concert in Birmingham... and yet prior to that I had never heard of a kora, let alone contemplated buying an album of kora music… 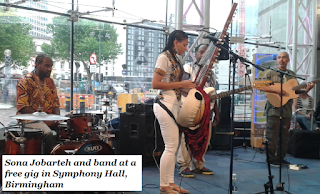 Later that year I was lucky enough to see the “Adios tour” by members of the Buena Vista Social Club from Cuba… almost nobody in the sold-out hall understood the song lyrics or the introductions by the band. Did that matter? Not one bit! The sheer joy and enthusiasm of the band was all we needed to have a fantastic time and prove once again that music truly is the Universal language. 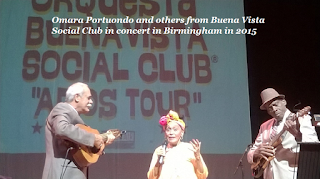 Above anything else, to me “world music” is authentic music, played by real people on real instruments. It’s not some-one locked in a studio with a bank of computers and samplers with a vocalist who needs auto-tune to hit the right note. This is proper music. It reflects where it comes from. Yes, it can be rough around the edges sometimes. Good. That just makes it more real!

So, why don’t you try it? Every fortnight on One World Music Radio I have a show “One World One Voice” that plays the best in music from all corners of this world of ours… please do come join me one Monday… I guarantee after a few listens you’ll be just as hooked as me!

Posted by Chrissie Sheppard at 04:29