Cooking the (Song) Bridge: The Dessert? by Swagata “Ban” Banerjee

In my articles for In The Key Magazine, I intend to focus on the art, craft, business, and advocacy of songwriting in particular, and music in general. I must also admit that none of what I say here reflects the views of the magazine itself or its owner(s) and may not have been authenticated by any of the parties referred. Instead, all that I express here is purely based on personal opinions, experiences, and observations and inferences drawn thereof. No one should be held liable for any unintended errors, misstatements, or misrepresentations on my part. My articles are meant for education, introspection, entertainment, and pure fun.

What is a bridge? One of the textbook definitions is, “(it) is a passage of music that contrasts the verse and the chorus, and is generally used to take the listener from one section to the next.” Lyrically, the bridge is typically used to pause and reflect on the earlier portions of the song or to prepare the listener for the climax. As a matter of prosody (marriage of music with lyrics), the melody has to mesh with words such as to make that ‘reflection’ or ‘preparation’ to happen.

The bridge could provide a solution to a problem discussed in the earlier sections of the song or draw your attention to an adverse situation or its possibility amidst all good things discussed elsewhere in the song. Alternatively, it could also provide a different perspective compared to the rest of the song. Perhaps a good way to put it is when you are looking at a river from afar (i.e., the rest of the song) versus when you view the river from atop the bridge on it (i.e., the bridge). 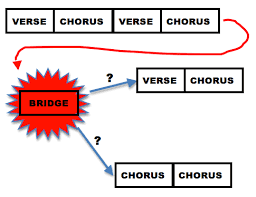 Producer/songwriter Jack Antonoff (in a recent interview discussing Taylor Swift’s 2019 hit “Lover”) describes the bridge as a tunnel which arrives from nowhere, takes you to another place for sometime, and then brings you back out to light

Where is the bridge in a song located? If you search online, you get the idea that the term may also refer to the section between the verse and the chorus, though this is more commonly called the “pre-chorus” or “link.” I don’t know (haven’t seen it myself) who does call it that, but apparently some do!

In most popular western music, the bridge is usually found after the second chorus, and transitions into the last chorus. If verse sections are denoted as A, choruses as B, and the bridge as C, this structure would be represented by ABABCB. Some popular examples for ABABCB songs are “Hot N Cold” (Katy Perry, released 2008, written by Katy Perry, Lukasz “Dr. Luke” Sebastian Gottwald, and Karl “Max” Martin Sandberg), “What's Love Got To Do With it” (Tina Turner, released 1984, written by Terry Britten and Graham Lyle), and “Girl” (The Beatles, released 1965, written by John Lennon, credited to Lennon-McCartney).

Another of the more popular song structures in modern western music (pop, jazz, and gospel alike) that uses a bridge is AABA, where A is a verse and B is the bridge. Some popular examples for AABA songs include "Yesterday" (The Beatles, released 1965, written by Paul McCartney, credited to Lennon-McCartney), "Crazy" (Patsy Cline, released 1961, written by Willie Nelson), and "Over The Rainbow" (Judy Garland, 1939, written by Harold Arlen and Edgar Yipsel “Yip” Harburg). [Refer to Songstuff for more: https://www.songstuff.com/song-writing/article/aaba-song-form/.]

Can a song have more than one bridge? A common variation of the AABA form is AABABA. Evidently this form makes the bridge (B) and a verse (A) repeat melodically, but can have different lyrics in B or A or both. Also, there are songs that can have additional or reordered sections, such ABAC, ABCD, and ABAB forms, where C and D are new sections or sub-sections. Extending the length of the song, advancing the story, detailing message, or creating some sort of lasting impact via repetition could be some reasons why the writers might want to use such appended variations.

A song with lyrics, however, can have a bridge that is only ‘musical,’ only ‘lyrical,’ or a mix of both, where the music part may sometimes termed as an “instrumental break.”

How long should a bridge be? Usually 8 bars, and that is why it is also called the “Middle 8,” especially outside the United States.

Why is it called the “middle 8”? Because it is a section in a song that tends to happen towards the middle of the song, and tends to be eight bars in length. The purpose of this section is to break up the simple repetition of a verse-chorus or verse-verse pattern.

A bridge is also sometimes called “the release” because of the change in mood this section brings due to some sort of variation in one or more of the following: lyrics, melody, chords.

Do songs need bridges? In other words, “to bridge or not to bridge, that is the question.” Like you can have a meal without a dessert, of course, a song doesn’t always have to have a bridge, but most modern western pop/rock songs do have one to make it structurally viable and “radio-friendly.”

Remember that a bridge is your way to extend your song, to enhance the emotion of your lyric, and to contour the song's energy level. Not all songs need a bridge, so don't feel that your song is incomplete without one. Like I said earlier, like a dessert is to a meal, the bridge is to a song, not always existent.

Noted songwriter, author, and songwriting coach/critic Jason Blume’s January 7, 2016 article in Music World entitled “To Bridge or Not to Bridge? Answers to Hit Song Structure Questions - The latest trends in writing hit songs that listeners are voraciously embracing” delineates how sticking to one of the few most popular song structures that most listeners are familiar with is a proven way to succeed in reaching your audience. This may or may not include a bridge. I highly recommend taking notes from the article:  https://www.bmi.com/news/entry/to_bridge_or_not_to_bridge_and_other_songwriting_questions1.

In my experience, most modern Indian songs do not have a bridge. I can opine that this is apparently because the variations, both lyrical and melodic, are brought about in the various sections of the song. The lyrical variations take place in the verses, and the musical ones in the prelude and interludes.

One of my all-time favorite songs, “When You Say Nothing At All” (released 1988 for Keith Whitley, and for Alison Kraus and the Union Station version in 1995, written by Paul Overstreet and Don Schlitz), has a Verse-Chorus-Verse-Chorus-Chorus (ABABB) structure with no lyrical bridge. The musical bridge (flowing in and out) between the last two chorus sections amply creates the supposed contrast, transition, or break. Something to note, the 1995 version of the arrangement has a longer musical bridge than the original 1988 version, making in part the overall song longer.

Me personally, from a musical standpoint, sometimes tend to use a key change in a bridge – not necessarily a wild one, but maybe to a relative minor key in a song that is in a major key. Lyrically, I like to see a bridge as something that can really enhance the overall song with a fresh (even unconventional or unpredictable) look at the topic at hand.

Having discussed “verses” and “the bridge” already, it feels appropriate, though challenging due to space limitation, to discuss the “chorus” next time. It is usually considered the most important part of a song (the “main course” in a song meal), but along with it, we shall also take a look at the associated, sometimes confused, terms “pre-chorus,” “post-chorus,” “hook,” and “refrain.” Stay hungry until then!

Note: All song release dates are original releases, as singles or on respective albums, unless otherwise mentioned, regardless of whoever/however many artists recorded later versions.

¹ Ban is one-half of the duo Ban Brothers (www.BanBrothers.com), the other half being Gautam Banerjee. They make world/indie music right from the heart with the simple goal of moving you! They are currently managed by Rick Barker, who managed and helped catapult Taylor Swift to her superstardom.

Posted by Chrissie Sheppard at 12:55