Speaking of Firsts, one of the earliest known composers from the Medieval period was actually a WOMAN!  This remarkable German nun from the Rhine Valley was none other than (see pic above) “Saint Hildegard of Bingen”.  This 12th century lady wrote Plainsong settings of her own mystical poetry, and she led in a field where female composers were not that prominent….talk about ‘girl power!’ 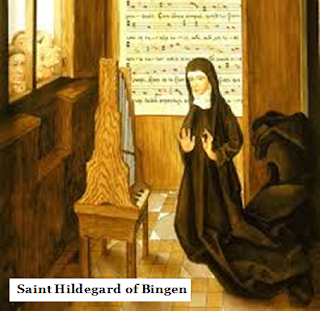 Hildegard wrote music using an early form of German pneumatic notation which to us would resemble ‘a lot of squiggles on a few lines’. Her melodies were actually quite complex and decorative for the time and none more so than in the Antiphons and Hymns.

Since her death in 1179, female composers have been scarce, practically non-existent… (although I do believe Schuman’s wife Clara was a wonderful composer and pianist).   Today Hildegard is known as a ‘feminist icon’, who deserved to be later canonised and there has been a recent revival of interest in her music, the most popular being “A Feather on the Breath of God” featuring her sequences and hymns.  I personally recommend the 1981 CD on the Hyperion label, recorded in London and led by the celebrated English soprano Emma Kirkby.  Listen to it here:

At musical polar opposites is another great German …. The 20th century recording giant KH Stockhausen!!(my daughter Penny just said to me, “mum he looks like Rick Mayall”).  This radical composer was at the cutting edge of electronic music in the 1960’s and 70’s.

After the Second World War he studied music at a college in Cologne and later at the university there. On his travels to Paris in 1951, he rubbed shoulders with the French composer Messiaen at a summer school and he must have been suitably impressed as he asked Karl to study with him. 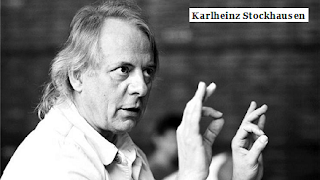 Checkout some of the results:

Goodness me!! It was at this time (and forever the experimental man) that Mr Stockhausen concocted his first serious electronic work entitled “Musiqe Concrete” ……surrounded by all his gear and tapes etc. (I’m almost visualising a cement mixer at this point!) 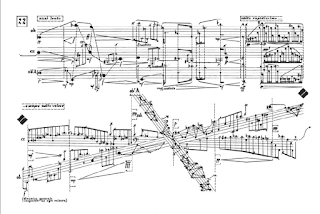 ‘Serial Music’ was another one of Karl’s passions, simply put it’s where composers play around with the ’12 notes’ available to them within a scale so it’s organically chromatic ~ the word ‘chromatic’ in music basically means COLOURFUL so the sound is much more interesting and moves in semitones.  Another leader in the field of serialism was Anton Webern and Karl was very much an admirer, so am l. Webern continued to be an inspiration for him. I must interject here with a story about Webern …..l was watching the Leeds Piano Competition way back in the nineties and one of the finalists played a Webern piece, it was stunningly beautiful and very angular. Anyway, about what l thought was the half way point the pianist just stopped playing, pulled down the lid and walked off the stage. It left me feeling terrible for the performer who had stage fright, or so l thought …. But it turned out that this act was actually written in the score and part of the performance!! You live and learn.

Unusual ‘grouping’ was a hallmark of Stockhausen’s music, for example, a typical line up of instruments could be 4 chamber groups, 1 soprano, a few percussion instruments, and 1 grand piano. He would also vary the order in which they performed and ‘overlapping’ was a key device.

In later years from the 70’s onwards, he took a leaf out of Wagner’s book and embarked on a HUGE opera cycle called “Light” which consisted of one opera for each day of the week! This massive project also spawned some related instrumental pieces ……brilliant….he was a musical recycler!! ( as am l ) .

Below, l have left you to contemplate one of his most well known works “Kontakte”.  Get ready for some radical sounds! This is where my mum says “where’s the tune?!”  It’s very percussive and explores the timbre’s of the Gong, Cymbal, Snare Drum, Brushes, Modern Drum Kit, Glockenspiel, Triangles and The Grand Piano ( which is actually a percussive instrument ).  In this You Tube 38 minute performance, ( you may not get to the end ) a fine young lady pianist plays wearing no socks or shoes, preferring to feel the vibrations through her feet, just like our Dame Evelyn Glennie.

Posted by Chrissie Sheppard at 06:29