Message In A Bottle 3 by Dave Bessel

This month sees me working on artwork for an upcoming new electronic release on Din records, uploading a short video game trailer I did the audio for, trying to get a couple of outstanding projects to their final stages and uploading audio for a ‘Folk Horror’ soundtrack release. https://davebessell.bandcamp.com/releases As ever the modern independent musician has to take care of all manner of things not just make the music. When it comes to artwork I enjoy messing about with images and video even though I always get an attack of imposter syndrome when I work with the visual arts!

Doing this kind of artistic multitasking brings to mind Wagner’s goal of creating a totally unified art form which he tried to realise by building special effects into his opera house at Bayreuth and writing his epic multi-media operas such as the Ring cycle. In some ways we are closer to his ideal with the technological tools at our disposal nowadays, it’s almost expected that an audio release will have some kind of visual element to accompany it online. 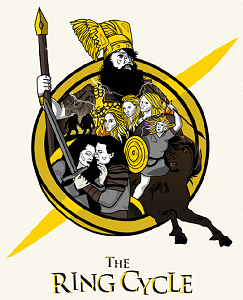 In the spirit of Wagner I have been trying to push forward the possibilities and have been experimenting with Virtual Reality features to add to my upcoming releases. You can get some idea of my early experiments by exploring this 3D environment. It can be viewedin a VR headset but if you don’t have access to such a thing then you can navigate around it with the mouse too. Just follow the link then drag with the mouse to move about: 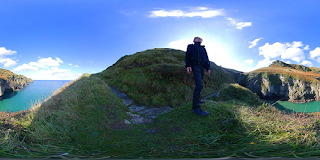 All of this begs the question do these kind of multimedia bells and whistles add to an audio release or do they distract in some way from the listening experience? Personally I have mixed feelings, sometimes I just want the listener to pay careful attention to the detailed work that goes into my audio releases and to that end have sometimes done live performances with just a single candle on the stage. On other days I want to go the whole hog and immerse the listener in an entire world that engages all the senses. Many musicians experience music in an enveloping and immersive way themselves and some have therefore aspired to communicate that immersive experience to a more general audience. Scriabin was one of the first classical composers to write out a part in his scores for a lightshow that was the precursor to the visual bombardment we can experience at a large scale rock concert today. VR offers some pretty interesting possibilities in that respect and I imagine I will continue to explore and expand what can be done with those tools in future. 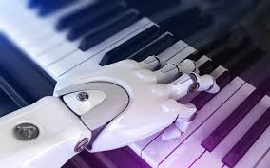 One other possible downside of the new technological possibilities is that sometimes the tech tools are not that easy to use and stretch both the imagination and capacity for technical understanding of the artists. I’m fortunate in that I can dedicate most of my time to this but for many musicians who have to juggle a day job time is a serious limiting factor too. On balance though I think the expanded opportunities for artistic expression we have available these days are probably a good thing and I have a feeling Wagner would have been right at the forefront with Bjork and similar artists in exploring these virtual worlds.

Posted by Chrissie Sheppard at 09:12