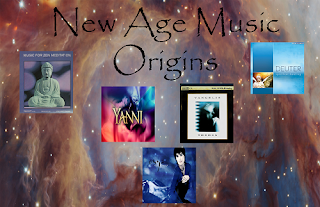 The term New Age is broadly used for our music. Most people when they hear the word new age music, they think of everything from Enya to Yanni music, but, that’s just one category. New age music has evolved over the years to include many sub-genres of our music that we musicians keep evolving to express ideas, emotions, etc. Our music is like painting a picture to convey things.

The term new age music was probably coined in the early 1970s when most people were looking for healing and spirituality after the turbulent 1960s and through music, they thought they could find peace through mind, body, and spirit through music.  The first considered new age recording was jazz clarinetist Tony Scott and his album, Music for Zen Meditation. Some of the influences of early new age music were carried over from meditative Indian music among the followers of Rajneesh.

Deuter recorded his album D in 1971 which mixed acoustic and electronic instruments with sounds of the ocean. He traveled extensively throughout Asia in search of spiritual and creative inspiration, especially after a near-fatal car crash in his early 20’s. He settled for a time in Pune, India where he became a neo-sannyasin (a disciple of Bhagwan Shree Rajneesh). He used a multitrack tape machine and recorded a series of tapes for active meditations which merged Indian classical motifs, loops, bells, and pastoral acoustic passages.

Kay Gardner’s first recording, Mooncircles in 1975 was music of synthesis and Wiccan spirituality and was ‘new age music’ before it was labeled New Age music.

Stephen Halpern recorded Spectrum Suite in 1975 to balance the chakras within our bodies using the seven tones of the musical scale that pioneered the practice of musical healing in the United States.

The music during this period was crossover Indian music and then eventually synthesis electronic music. This was interspaced with nature sounds to convey outdoor meditation. As new age music evolved over the next few years during the 70s, electronic synthesis and electronic sounds were being used more to evoke the nature of creativity within the music itself. By the early 1980s, the musical influence of new age music morphed into regular instrumentation, like piano, strings, woodwinds, guitars, etc. with a sprinkle of electronic keyboards mixed in. The constantly evolving nature of new age music brought rise the likes of Yanni and Enya.

Yanni’s music was influenced by his love of the piano which he had to overdub on a multitrack recorder due to his ability of not able to play with both of his hands on the piano at the time. Over time, he learned to play the piano and compose music that was in unique time signatures. His first album, Optimystique was release in 1980.

Enya’s self-titled album, Enya, was released in 1987. She used the power of multi-track to lay down multiple takes and overdubs of her voice to create soothing songs. She used regular instruments like piano and strings along with Irish and other ethnic instruments to create her music.

In 1976, Windham Hill Records was founded along with Narada Productions, Private Music, Music West, Sonic Atmospheres, Living Music, Novus Records and many other labels that either embraced or rejected the new age term.

Stephen Hill founded the new age radio show, ‘Hearts of Space’ in 1973 which catered to New Age music but gradually morphed into Space Music which is another sub-genre of New Age music which we will explore in another article.

Our music constantly evolves to express what we feel, see or to go beyond what may be possible.

Posted by Chrissie Sheppard at 07:29