Looking Back with Michael Kent Smith 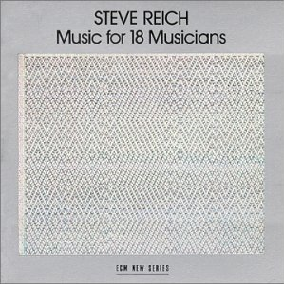 I first heard Steve Reich’s “Music for 18 Musicians” on a sampler album I mail ordered from ECM records in 1979. When it arrived I put it on the turntable expecting to hear some great Keith Jarret/Pat Metheny flavored jazz with that reverberant, lush ECM sound. On side A I wasn’t disappointed. However, when I flipped the record over to side B, Reich’s “Phase V” began to play. The unusual sound grabbed my attention immediately but after a minute of unchanging repetition I began to wonder what the heck was up – was my turntable needle skipping? I thought about jumping to the next sampler track, but as soon as that thought entered my mind, the music underwent a subtle but clear change and I was engaged all over again. This cycle repeated itself roughly every minute for the five-minute duration of the piece. I was hooked and had to hear more.

The full work begins with a “pulse prelude” consisting of a series of 11 chords. The ensemble rhythmically pulses the pitches of each individual chord one after the other, foreshadowing the harmonic material to come. Each of the following 12 internal sections is based on one of those 11 chords presented in the prelude (chord III is honored with two sections) and functions as a kind of harmonic expansion of one chord from the prelude sequence. The individual sections are built using arch forms and musical processes such as addition/subtraction where notes replace rests and vice versa. In several cases the length of a repetition is defined by the singers’ or wind players’ breath capacity, giving the music a more organic character. The piece concludes with a “pulse postlude” that cycles again through those 11 chords. This is all presented through the sonic lens of what David Bowie referred to as a West African drum ensemble masquerading as a Balinese gamelan ensemble. Reich actually did look to African ensembles and Balinese groups and was inspired by them to have “18” performed with no conductor. The instrumentation is 100% acoustic, but the resultant sound has more in common with electronic music.

The roughly hour long work was completed and premiered in 1976 but the recording wasn’t released until 1978. Deutsche Grammophon had recorded the work in 1977 but didn’t release it due to a fear that it would not sell. ECM owner Manfred Eicher purchased the masters from them and released it on his own label. It sold over 100,000 copies in initial release, which is 10 times the amount that a typical piece of new classical music sells – a testament to Eicher’s sharp ear for modern classical music.

Although it has been criticized as “zombie music”, the power of the piece has only increased over the 43 years since its creation. Over that lifespan, “18” has influenced musicians like David Bowie, Peter Gabriel, Robert Fripp, Brian Eno, Pat Metheny, Stereolab, Aphex Twin, and Tortoise. In fact, most most electronic music from the mid 1990’s forward as well as a host of contemporary classical composers have been influenced to some degree by Reich’s work. In addition to its influence on other composers’ style, ensembles keep recording the piece and every new version sounds different from all previous ones, which speaks to the musical depth of this work.

Posted by Chrissie Sheppard at 07:35