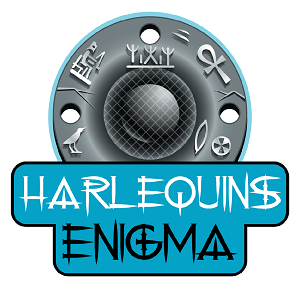 It is now 11 years since Ăge Riisnes & Sara Jensen founded Harlequins Enigma back in 2008. Harlequins Enigma composes electronic music in multiple genres, and have gone more or less their own way as time has gone by. They have released numerous albums & singles in a variety of electronic genres.

Since the beginning the music was composed at Ăge's home studio. The fact that he got into spirituality along the way, helped him to grow as a musician. He met among others Edgar Froese, Jerome Froese & Klaus Schulze spiritually & they functioned as time went by as mentors for Ăge, along with Dave Weckl & Jan Garbarek in a period that lasted a little over 2 years. The period ended in February 2010. The Tangerine Dream material can be heard on the TD sound 1 & TD sound 2 series.

After Edgar’s death, and also the death of Ăge's brother Ken, Klaus Schulze remained as Ăge's mentor & friend. They released some great singles like Nicaragua Canal & Relief Escort. Ăge's mentors, family & Sara Jensen, Sara Q, Katie Leung & Elin Berge (Ăge's cousin),  were very supportive in Harlequins Enigma's active period. Ăge has been laying ill for the few last years, but the band is still active. Summer saw the release of 4 singles, and Ăge has released two 1 genre only albums this year called "Raw Tangent K" a rock compilation featuring the best extreme electro/rock/grunge material they produced, this in both of their active periods. The other album is a classical/New Age compilation called "A Diary", also from both periods.

Harlequins Enigma is a Norwegian band and will never stand on stage, although that was never their intention. Ăge is a composer & producer & has been managing Harlequins Enigma since the beginning. He reminds readers to check their music in their favourite way, either via YouTube, Spotify, or purchases via Bandcamp, iTunes, 7digital or google play.

Posted by Chrissie Sheppard at 08:47