Music Was My First Love Part 1

When I think back, music started to embed its way into my life perhaps as far back as 1963, I remember my mum having my haircut like her favourite Beatle, Paul McCartney, but I preferred George Harrison! My life would go like that, I would like bands than no one had heard of, groups that were unfashionable and singers that were outrageous, oh the impetuous nature of youth!

However by the 70’s I was musically irrepressible, thanks to my cousin I had been introduced to Procol Harem, Radio Caroline and Teenage girls, I think in that order. My Sundays were spent recording on a reel to reel tape machine, capturing the BBC top 20, yes it was those days when the vinyl buyer used to tune into see if his purchase had made a difference in the chart, of course it was all illusion, but it made you feel good.

My musical database grew like wild fire and  did something rash but inspired, one that turned out to be a master stroke in 1976, by buying an album purely based on the fact I adored the cover, it was a release called Time Honoured Ghosts by Barclay James Harvest, a truly unfashionable band who I thought know one liked, so of course I loved them, but now for the first time I had dared to dip my toes into the world of that heathen of all subjects, rock music!

My mother was not pleased, coming from a strict religious upbringing, music was not something I heard around the house, I had to hide away in my room with my old turntable, turn the lights out and just have it up enough that only I could hear it, It was like musical porn. At night time I had my radio under the covers, I bathed in the occasional sounds of Radio Caroline, and developed good hearing skills, as I listened to Radio Luxembourg come in and out of the airwaves, like the ocean on a summer’s day, ah the good old days.

At this time anything weird or even slightly to artistic was frowned upon, but I understood the hypocrisy in this all too well, I usde to watch my mum gaze lustfully at both Tom Jones and Englebert Humperdinck, thankfully she never used to have any fantasies of a sexual nature with regard to Val Doonican, other than to constantly want to me wear those garish jumpers, and threaten to make me one for Christmas, after all he was a nice Irish boy, so that made everything right!

So, I became the rebellious teenager, I blame my dad actually, oh but if he had not of taken me to the local Wimpy Bar during that weekday in November in the early 70’s, then I never would have heard Status Quo blasting out over the shop stereo system, it was a single called Paper Plane and this moment would change my life forever, little did I know that some 40 years later, I would meet two of the band members and become friends with one of them.

As far as the teenage boy syndrome  I hinted at earlier and my ever growing interest in teenage girls, that was completely satiated by the first crush of my life in Suzi Quatro, a diminutive blond, with a leather suit, high heeled boots, a bass guitar and a raunchy rock sound, what more could a 16 year old lad want? 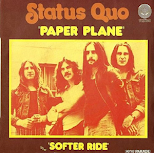 Posted by Chrissie Sheppard at 04:16